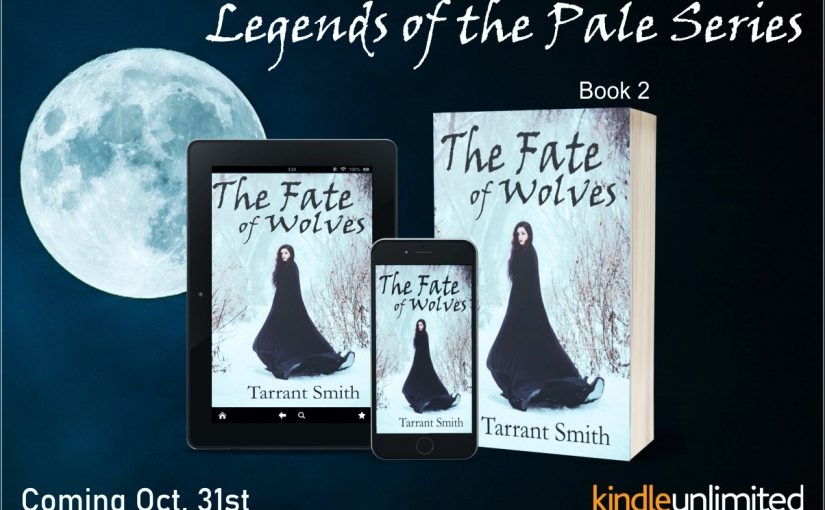 Though the kindle is due to be released Oct. 31st and the paperback in mid-October, I just couldn’t wait to share a little snippet from the book. I’ve already published Chapter 1 at the end of The Love of Gods. Here’s a little from Chapter 2:

Eva stoically worked her way to the bathroom that lay just beyond his bedroom. After being trapped in her wolf form for so long, the best she could manage was a jerking, halting kind of step, and bloody footprints marked her slow progress. The palms of her hands were just as badly abused as the balls of her feet, and they, too, dripped blood, laying a trail upon the rug and the wooden floor. What would happen when the one who’d called to her wolf returned to his house? Would she meet the wolf first, or the man?

The cabinet over the sink was well stocked with supplies. Gathering what she needed, Eva gratefully lowered herself to the edge of the porcelain tub and dabbed the hydrogen peroxide onto the balls of her feet. Then, rather clumsily, she bandaged them and the pads of her hands as best she could with gauze.

Why he or his pack weren’t here now was a mystery she couldn’t quite wrap her tired mind around. Entering his domain undetected should have been impossible. She’d come from the north, across his territory, onto his front porch, and up the stairs to his bedroom, leaving a clear blood trail. Her wolf had simply followed the route his mind had left behind after that initial contact. At moments during the journey, her human half feared it had been all a mistake on his part, completely unintentional, for the contact had occurred only that one time. How did he even know she existed? Eva had shared these doubts with her white wolf, but her wolf half had refused to be reasonable, and so it was now going to be up to Eva’s battered human half to deal with whomever or whatever found her scent trail first.

It took Eva a good fifteen minutes to summon the will to rise from her cool porcelain perch. During that time, she contemplated the likelihood that she would be dead by nightfall. She was the very last of her ancient bloodline, but that might not be enough to save her. She’d been taught about the packs. She knew it was an act of war to trespass on another pack’s territory. Her grandfather had warned her just how dangerous the male pack would be should they ever find her. He had not been the kindest of men, always quick to anger and sparing with his affections. Only Eva’s grandmother had looked forward to his visits. Unfortunately, Drako Azoulf was the only alpha Eva had ever known; as such, he had ruled her absolutely.

Stay away from the packs. Stay away from humans if you can. Stay hidden at all costs. These had been his laws, and they had guided her life as long as Eva could remember. Now, because of this stranger, by day’s end she would have broken all her grandfather’s commands.

The horrible thought that the one who had compelled her might deny what he had done—or worse yet, might be totally ignorant of the act—buzzed inside Eva’s mind like a fly. If he didn’t find her first, or if he wasn’t near enough to vouch for her, then she was utterly and completely screwed. Eva braced one hand against the bathroom wall. She was no stranger to death. She knew the scent of it, the taste of it.

With a slow but steady shuffle, Eva Ivanova Azoulf stubbornly worked her way to the corner of the neatly made bed. Rest was what she needed. Just a few hours of oblivion, and then perhaps she’d be able to confront the unknown. Her bandaged hand gripped the wrought-iron footboard just as a wave of dizziness hit her. Darkness fogged the edges of her vision, and then she crumpled and dropped like a hanged man cut free from his noose.

The Fate of Wolves (Kindle Edition) is available for preorder! I’m so thrilled!!!