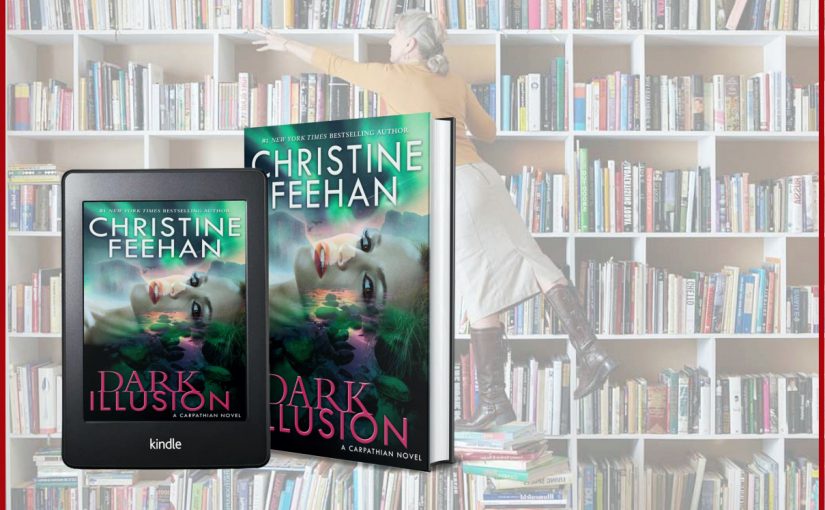 Dark Illusion is the 33rd book in Christine Feehan’s Dark Carpathian Novel series. I know this because I’ve read all of them. It’s safe to say I’ve been a fan of this heavyweight of paranormal romance for a very long time. But for the last few books, I’ve been struggling with stories that have lost their freshness, and prose that feel as if Feehan phoned it in.

Publishers Weekly said about Dark Illusion, “fans will devour this masterfully wrought tale…” My response is, “Oh Nay Nay!” Talk about phoning in a book review!

The most irritating problem with this book and many of her others is the repetition of endless information dumps. Most romance readers devour a book in one sitting. I don’t need an author to recap a character’s motivation or history in every single chapter. It’s annoying.

The basic plot of Dark Illusion is that Julija Brennan, a mage, is trying to track down an evil book before her family of evil mages gets their hands on it or her. Enter, Isai Florea – the Carpathian hunter who is so ancient that he locked himself away in a remote monastery to keep from becoming a vampire while he waited on his lifemate to make herself known to him. So what does Isai do when he finally finds her? He spanks her for hiding from him. Are you kidding me! The rest of the book is just as problematic. And I wanted to like this book!

In my opinion, the entire series needs to come to some satisfying end, and soon. At least let the faithful fans move on to a new series knowing that Prince Mikhail and the Carpathian race have overcome all the forces trying to destroy them. I would rather the books live on in my imagination than read another Dark Carpathian novel.

I did not post this review on Amazon. Christine Feehan has (as of this moment) 300 reviews for this particular book and she doesn’t need my assessment of her work. She has enjoyed a long career and has been an influencing force in the paranormal romance genre for many years. For that accomplishment alone, I respect her.